What does an aging star of the Silver Screen do when it's time to pass the feather to the new chick on the wire.

This was the dilemma facing the darling of days gone by, known by the singular name, Giselle. What would be her new flight pattern? Where would she land?

Lucky me! Giselle kindly answered my request for an interview. The following tells her journey of finding her true vulture self.

Louise: Hello Giselle! I never thought I'd be saying that in person. It's a true honor allowing me to interview you. You are as kind as you are beautiful.

Giselle: Well, aren't you the sweetest little dog! And so polite too!

L: Do I detect a touch of a Southern drawl?

G: South Jersey, honey. I've spent many winters in South Carolina too, so I guess the accent rubbed off on me.

L: We all know what a success you've had in the movie business. You were wonderful in "This Bird Flies Solo" and "Vulture Rhapsody".

G: Yes, they were both lovely productions. My break out role was the lead in "The Maltese Raptor". It was a non-speaking role and a bit of a stretch for such a young actress. I played a bird of prey as a bird of stone. Holding still for 120 minutes is really hard.

L: And you fell in love with your co-star, Freddy Falcon, correct?

G: We tried to keep it a secret. Freddy had a family and 6 young fledglings back in the nest. He wasn't getting along with his wife, Thelma, then. And these were times when birds of different species didn't intermarry. Many still frown on that practice. today.

"Birds of a feather flock together" and all that. What nonsense!

L: Well, the relationship was leaked by the magpie press. Did that hurt your career?

G: Au contraire, sweetie! Part of why I became such a big star was being in the media. What hurt me was the dwindling of good roles for female vultures of a certain age. The studios were turning out fluff and I'm not a fluffy kind of bird. I needed good meaty scripts...roles I could sink my talons into.

L: And so, after some time, you just gave it all up?

G: Yes, but I have no regrets. I found something that has given me great pleasure and helped me to become a better bird. I started an animal rescue service. We fly injured animals to veterinary hospitals all over the Northeast US. We hope to expand to the Southeast and Southwest within the next year. All of our pilots are vultures. We are called "Vultures with Heart" or VWH. Our slogan is "We fly them...we don't eat them". Perhaps we could have come up with a more catchy slogan, but that really says it all.

G: Healthy animals! What did you think? We're vultures!

With that, the interview ended and Giselle flew away without a moment's hesitation. I was not afraid Giselle would eat me. I am, after all, a small dog, but one made of pewter. 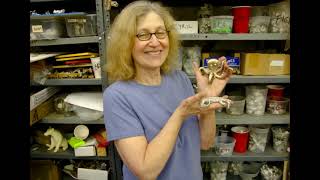